The AJ asked me to write a piece for the 6th Dec issue around UK Planning – This is the full article as printed: 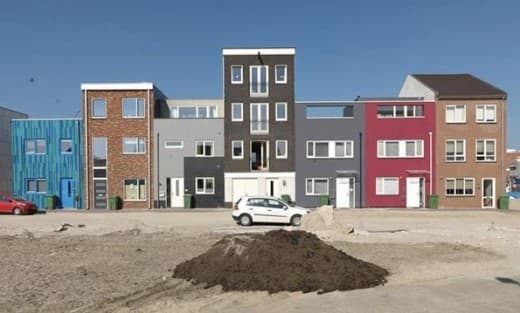 At present, the British planning system is predicated against any development that doesn’t conform to a ubiquitous homogeneity and sit in a banal middle ground. It is a system that is fundamentally flawed and wastes vast amounts of time, money and resources writing misconceived and half baked design guides that discriminate against anything that doesn’t fit in to an unbelievably narrow pigeonhole – a pigeonhole with ‘been done before and didn’t upset anyone’ as it’s title. How on earth do we go from here to a system that should allow architects to do what they are trained to do – imagine the future?

Architects are locked in a seemingly never-ending battle with local authorities over design – an area, it should be remembered, where planners have no training. It is easy to imagine a system where planners do what they’re trained to do – plan – and leave the rest up for grabs for architects and individuals to act as they see fit.

In housing, undoubtedly the only thing that really matters is the big picture – the infrastructure, the streets, the relationships of buildings to one another, the open spaces, the mix, density and use, and local demand. I’ve no doubt this should be highly controlled – but everything else should be determined by architects, developers and self builders.

For this to happen, planning guidance needs to change and planners need to stop meddling and micromanaging the areas outside their expertise. Almrere is an extraordinary example of this – an example of how planners can get it right. Almere, of course, is a planned city in Holland – a dense city with inherent flexibility at its core, and importantly, a city with a straight forward planning process for the easy bit – the buildings. Each plot comes with a ‘passport’, which is effectively a permit to build, and outlines the key (and important) restrictions – the gaps between houses, the relationship to the street, overall maximum height etc – and everything else is unrestricted. Home builders and architects are free to decide for themselves what the building can look like.

It’s mind boggling to imagine how much time and money we’d save in the UK if we adopted this type of system, not just for new towns, but also for infill sites in any city irrespective of its conservation area or world heritage status.  For example, each vacant site should be submitted for an outline consent specifying mix, density and use and the entire next step (that of detailed planning) omitted, and architects trusted to design buildings with no petty micromanaging from mealy mouthed planners. A new – and true – vernacular would begin to emerge over time, an exciting and diverse one where individual expression was valued and unregulated.

The irony, of course, is that most of the most interesting urban areas of the United Kingdom developed in this way up until the introduction of the planning system 70 years ago – and yet, under the current system, it is impossible to imagine that any comparable new build development could exist.

Image of Almere, Holland above.