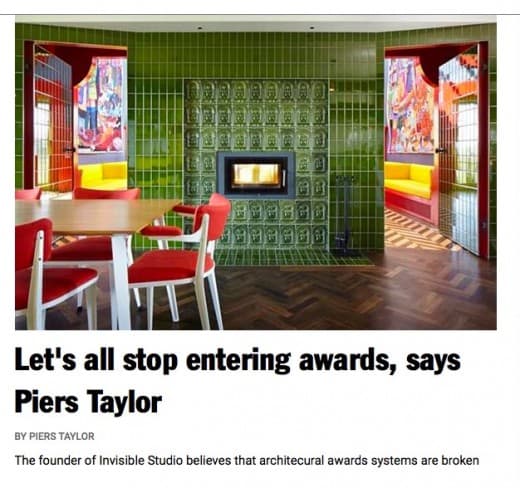 2016 has been the year when many in the architectural world cried ‘enough!’ The profession had always bullied FAT because more than anything, they’d dared not to be boring. For the most part many of us accepted the mean spirited bitchiness in the mainstream world of architecture towards FAT as an inevitable consequence of a world – a ‘profession’ as we pompously refer to it – that is, despite purporting to be free-thinking, steadfastly maintaining corporate modernism as peddled by the same old names that have come to represent a typically British brand of middlebrow banality.

But in 2016, when FAT’s A House for Essex did not receive a lowly regional RIBA award, there was collective shock. How on earth could a house that was beautiful, clever, authentic and inventive have fallen by the wayside, rejected as unsuitable recipient of a regional award, effectively eliminating it as a possible contender for a national award, any of the RIBA special prizes including the Steven Lawrence, the Stirling and the RIBA House of the Year?

Despite our gasps, of course we understood absolutely why A House for Essex didn’t win an award. At a regional level, the RIBA awards (through which any project has to navigate if it is to be considered for a national award) is system often presided over by jurors incapable of understanding work better than their own, hell-bent on maintaining the predictability of the outmoded banal Vitruvian triumvirate – Firmness Commodity and Delight – or Same Old, Same Old, Same Old – which effectively forms the ‘checklist’ by which jurors can pigeonhole buildings. As Jeremy Till pointed out in ‘Architecture Depends’ – so vacuous is this supposedly sacred threesome that it could qualify as the slogan for any political party, regardless of its bias.

Listening to regional jury chairs bristle about the awards decision for A House For Essex on social media was to listen to the predictable self-righteousness of the certain, unable to critically assess a work of architecture outside of their own prejudice or the absurdly limited checklist provided by the RIBA. ‘I just didn’t like it’ said one – ‘wacky’ and ‘I don’t know anyone that likes it’ said another, while ‘it’s only taste’ said a third. Really? Is this all this ‘great profession’ of ours is capable of? In the world of regional awards juries, it seems that way, and is entirely expected within an institution where anything goes as long as it is sapless, vanilla and platitudinous.

Beyond A House for Essex, there is, as Ellis Woodman pointed out in the Architects’ Journal recently, a fairly remarkable list of buildings that were not considered sufficiently accomplished by regional juries to receive RIBA awards, or even, in some cases, to be shortlisted. The list (which is not exhaustive) makes fairly sobering reading for even the most ardent RIBA Awards champion, and includes David Chipperfield’s Fayland House (AR House of the Year) in Buckinghamshire, Stephen Taylor’s Stapleton Hall Road houses, Cottrell & Vermeulen’s Brentwood School Adam Khan’s Pensthorpe Bird Reserve, Paddy Lynch’s Marsh View, Ian Ritchie’s Sainsbury’s Wellcome laboratory at UCL and AOC’s The Green Community Centre. Were it that the level of attainment was so high among regional award winners, one might understand the omission of these projects from the list – even if one would not agree.

But, much of the annual lists of winners are made up of the entirely predictable, middling and plain old dull that characterizes so much of British regional architecture, and these awards omissions undermine the credibility of an awards system that should be able to separate juror prejudice from genuine architectural merit. But really, we should be used to this – as the UK has consistently been unable to champion the truly excellent- as is witnessed in our repeated bungling of large cultural projects from Cardiff Bay Opera House to – as Jonathan Meades so appositely put it – the ‘embarrassingly feeble’ National Gallery extension. Put simply, we are scared when something is too good, too different, too unusual, or too bloody clever.

I have just come back from an extended international trip, and the sheer diversity and accomplishment of much everyday European architecture is truly eye opening. With it, the Europeans ability to seamlessly interweave exceptional architecture in a matter-of-fact way into the fabric of the built environment that would simply not be possible in the UK with our tyrannical cultural fear and our relentless dumbing down to a safe middle ground.

Time was when ‘architectural merit’ was easier for many to define but the architectural world has moved on immeasurably since occupied by the comfortable certainty of Vitruvius or Mies. It’s a diverse, plural world that we inhabit now. If the Turner Prize can broaden to include art that is diverse – surely the RIBA awards should do the same? Perish the though that Assemble’s Granby Four Streets could ever had won the Stirling Prize, let alone an RIBA award at any level.

Most of the major or minor RIBA winners have, of course been pretty safe ‘high’ architecture, and there is little doubt that this needs to change to reflect an emerging wider discourse in contemporary practice. The tide is turning away from – as Sean Griffiths so perfectly described – the men in their colouful shirts/black suit combos – to a generation younger, more engaged practitioners, producing work that much of the old guard would probably not even consider ‘architecture’ but represents exciting new possibilities for a ‘profession’ that needs rethinking, and accepted modeS of practice that many are abandoning.

These practitioners include Assemble, of course and others such as Baxendale, Adam Nathanial Furman and Studio Weave. They and many others are included in the Architecture Foundation’s recent ‘New Architects 3’ publication, which celebrates the work of a generation grown tired of the cultural domination by the sapless and corporate safe-as-houses architecture we have tolerated for too long. These practitioners’ work is multiplicitous, socially and culturally engaged, and occupies a place where labels defining disciplines don’t mean much.

Hardly a day goes by without a junk email or call, promoting yet another inconsequential award and calling for entries. If the purpose of the RIBA awards is to protect the status quo, most of the burgeoning number of awards in the UK and internationally are no better, being commercial affairs. As Hugh Pearman points out, these are usually cynically invented solely to make money for the organizers. Along with the RIBA awards, the currency of these is decreasing, as fewer architects seek the self-congratulatory and self-indulgent boosts to their self worth. Possibly the only awards worth receiving are those that cannot be entered – including the Turner and the Pritzker – but even these awards, despite Assemble’s Turner Prize win, feel irrelevant to many contemporary practitioners, who are abandoning the RIBA sanctioned value systems of the previous generation and its support for a system that reinforces cultural conformity.

Other than being big business for the organizers, the awards systems also underpin and reinforce a tacit separation between architects and non-architects – who we sanctimoniously refer to as ‘the general public’ – from whom our work is becoming increasingly removed and irrelevant. I suspect winning a peer-award means more for many architects than producing a building of social, creative and cultural worth that does not fit within the strait jacket of awards conformity. Like many others, I’ve grown tired of awards and their meaningless rhetoric, and suggest we follow the dignity of architects including Irena Bauman’s example and simply refuse to enter awards, in the hope that the institutions that benefit from them will shrivel and die a long, vapid and hackneyed death.