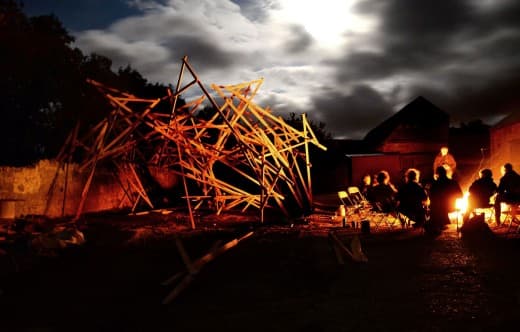 Photo: Studio in the Woods 2011 Piers Taylor and Meredith Bowles

Oliver Lowenstein asked for some text describing Studio in the Woods…

Astonishing as it may seem, most architecture Students have limited contact with real materials or construction and instead operate in a kind of parallel universe where projects are imagined in abstract at scale in a kind of weird digital code space, a space where ad hoc, inventive and impromptu decision making is excluded from the design process. Studio in the Woods began as a reaction to this about seven years ago, but didn’t begin with a manifesto – I simply asked the cleverest and most interesting architects I knew if they fancied coming down to the woods around my house to make some stuff with some students over one long hot weekend in July. To a certain degree, I’m always slightly nervous of premeditating too much, and taking a cue from Dylan, we just threw the cards up in the air to see where they landed.

Where they landed – or what came out of the first weekend – set the pattern for subsequent years. We’d ignore any given brief, and, in about 5 parallel groups of architects and students over three days, design and construct– with a simple kit of parts and a limited palette – a research project over three days, and we’d intersperse the incredible hard work with great food, compelling talks and pearls of poetic wisdom from Ted Cullinan and sound pragmatic advice from Peter Clegg, and refreshing irreverence from the punk designer David Connor. Over time, we all fell in love with timber – we’d all had limited contact with it, and it was thrilling to embrace the tactile, volatile and almost carnal qualities of wood.

Although Joseph Kohlmaier has hosted it for the last two years, Studio in the ­Woods doesn’t really exist – it’s an invisible studio. There’s no institution, no one owns it, no organisation funds it, no one audits it, and it is beholden to no one. It’s a group of people that have come together each year for the last seven years, and each time there’s never any sense that it will necessarily happen again.

Like my practice, I like to think Studio in the Woods happens despite me, not because of me. It grew out of a frustration of having taught in institutions that I felt out of synch with, places where people talked about learning outcomes above all else, and out of a joy I felt in the chaos and surprise of making quickly at 1:1. It was also, selfishly, a way of getting together many of the people I had respect for, hanging out with them for a few days and watching them do their stuff. In addition to Peter and Ted, These people were Meredith Bowles, Kate Darby, Gianni Botsford, Toby Lewis, Charley Brentnall, and in recent years Susanne Tutsch, Barbara Kaucky Je Ahn and Maria Smith. We’ve also been joined by Toby Maclean, Lena Ghotmeh, Shin Egashira and Martin Self (who led the AA pavilion projects) to name a few, plus, of course, the brightest and best students from all over the world.

There’s been a desire for those on the outside to try and pigeon hole what we do – that it’s either ‘wilfully odd’ (astonishingly, from a BA course leader at a mainstream University), or as if being interested in wood and place means we’re only interested in wood and place and as if mainly operating with lo-tech equipment during the workshop means we’re somehow anti technology and anti modernity. Quite the reverse is true, and I suspect that one of the questions that many of us have in the back of our minds is how the realm of digital simulation and fabrication can co-exist with adzes, spuds, cat’s paws, hammers and chisels. In many ways Studio in the Woods is a celebration of our diversity (as individuals, as a group) as much as our similarities and I’d hate it to be limited to a predefined ethos

I don’t know what we’ll do next year, or where we’ll do it, but what I do know about Studio in the Woods is this: The power of working in a group; the fascination of seeing the diverse  approaches of these different groups and tutors;  the joy of the happy accident;  the intensity of bringing something to a conclusion in a short space of time; the visceral thrill of materials, and of timber; the heady pleasure of working outside in summertime; watching people at the top of their game; seeing the intelligence of the students; the pleasure of being surrounded by good friends, and James Payne’s pithy observation that it’s not JUST a forum for a bunch of chainsaw wielding hippies, but there’s also serious intellectual debate.