Westonbirt: One of UK’s ‘Most Incredible Buildings’ 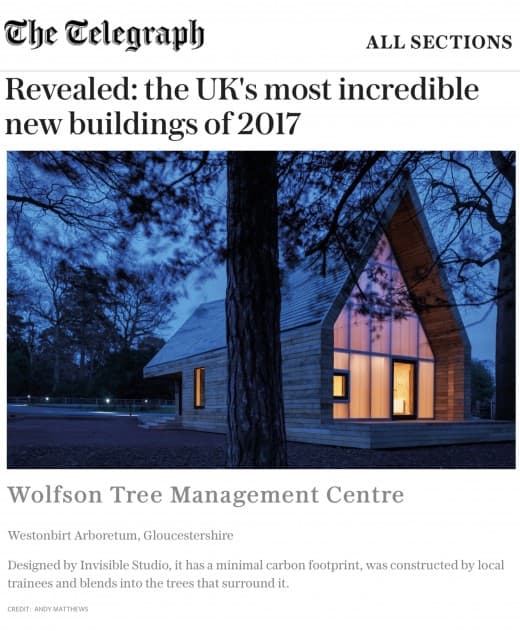 (Piers Taylor was asked to write an extended piece on his interest in ‘making’ for the Scottish Ecological Design Association magazine, how this interest developed through Studio in the Woods, and how this informed Invisible Studio. This is the full, unedited text.)

Over the last decade or so of practice, research and teaching, I have become increasingly interested in how the process of design can be re-imagined to benefit from the discoveries that emerge from the process of construction.  Clearly, there has been a resurgence of interest in ‘making’ over the last few years and while I have little doubt that making for its own sake is rewarding, for the large part my interest in making is not just as an end in itself, but instead as a process of investigation that leads to new insights.

There has been a boom in design/build workshops and courses recently, and most are still structured in such a way that the ‘design’ stage is a precursor to the ‘build’ stage, rather than weaving together designing and making in reciprocal fashion to allow the discoveries that arise during the build process to be incorporated into the ‘design’ – or rather, BE design. But, what if the process of design was turned around, and instead of using the control mechanism of an empirical set of fabrication documents to banish variables, contingencies, chance encounters, or, God forbid, mistakes, and instead, allow the real time choreography of a process where drawings and construction evolved in parallel?

This is a way of working that I’ve been moving towards. Underpinning this move towards a different way of working is a fascination in using full scale making as a method of testing ideas, and using the process of consolidation or accumulation as a design tool. Rather than refining a prototype and then unveiling something perfectly formed and defect free, I am interested allowing a prototype to be continuously modified and adapted so that it is allowed to become the ‘final’ piece, with modifications and mistakes made manifest.

Note the use of ‘final’ in inverted commas here. A combination of architects’ fear, innate control-freakery and the legacy of the modern movement has meant much contemporary architecture has an obsession with the perfect, flaw free and sanitized jewel, frozen in time. There is an enduring idea in architecture of the photograph of the just completed building, free from the process of construction, the potential chaos of people and furniture, and certainly free of the patina of occupation, weather or aging that builds up. In my work, I’m not terribly interested in the ‘final’ – I’m more interested in the ‘ongoing’.

For me, the evolution of this thinking stemmed from building my own house, over ten years ago. It opened my eyes to a sense of what the process of construction and material exploration could offer. What followed was an about turn in my method of teaching, and the same year that I built the house a group of us started to do something we called ‘Studio in the Woods’. We didn’t ‘set it up’ – I’m suspicious of things that are ‘set up’ or premeditating too much – Studio in the Woods just evolved out of friendships with other architects, and casual conversations about how it may be fun to do a workshop with some students in the woods around my house. Taking a cue from Dylan, we just threw the cards up in the air to see where they landed, and trusted we’d be agile enough to catch things as they happened.

Where they landed – or what came out of the first weekend of Studio in the Woods 10 years ago – set the pattern for subsequent years. We’d test ambitious ideas quickly, at 1:1, using timber felled and milled on site. For me, the giddy and heady freedom that came with being able to work directly, with materials to hand and with the chaos and surprise of inventing on the hoof was amazing. Critically, it provided me a new model of working – one where new architectural forms and relationships could be discovered, rather than merely willed. One of the big questions many architects have is – if we don’t merely want to use precedent or deterministic processes, how do we discover architectural form? For me, allowing construction, material exploration and full scale making in real time went some way to answering this. In addition, it provided a freedom from a world where only ‘skilled’ people could make things. The material relationships that are formed by alternatively skilled (conventionally unskilled) people are often more interesting to me than those that are perfectly, and blindly, crafted. I’m a big fan of the ‘bodged joint’ where evidenced in it is the maker’s journey of discovery.

I also, through Studio in the Woods, discovered a world that conventional modernism had banished – a world of material sensibility where judgment was more important than design rhetoric or received notions of material relationships. This journey away from a place where making is over controlled has been fascinating. I grew up listening to music by people that were told they couldn’t play or sing. For me, this made their music better, particularly as it depended on delivery, and this delivery was freed from the tyranny of technique. Architecture is, or was, full of concern with ‘correct’ detail and material expression. Mark E Smith called Rock n Roll the ‘mistreating of instruments to explore feelings’, but in architecture, even at its most loose and improvised, there has conventionally been little room for badly made buildings – or buildings made without due regard for technique. My buildings are often badly made in the received sense and often have little regard for technique. This doesn’t mean I don’t care about how they are made – On the contrary, I care enormously about how my buildings are made, and the elemental relationships between components.

Partly through taking part in Studio in the Woods, but also through delivering the Big Shed at Hooke Park for the Architectural Association, I realized that there was no room in conventional practice for me. About three years ago, I resigned from the practice that I’d co-founded (Mitchell Taylor Workshop), and, inspired by an impromptu and adhoc coming together of interesting people at Hooke Park and Studio in the Woods, formed Invisible Studio – to allow me to practice in a way that makes sense to me.

Studio in the Woods doesn’t really exist – it was the original invisible studio. There’s no institution, no one owns it, no organisation funds it, no one audits it, and it is beholden to no one. Invisible Studio is similar. I have no fixed work force, no formal company – just a loose, unstructured collection of people that work together when the conditions are right, and not when they aren’t.

Alongside this, the world of timber has become more and more fascinating to me over the years since the first Studio in the Woods, and I’ve recently bought a woodland with my partner, which we manage alongside practice and family life. We’ve recently built our studio in it with timber from the woodland using friends and neighbours in the construction, and almost no drawings. We’re busy now delivering 2 buildings for the National Arboretum using a similar method. What’s curious is that it is technology that allows me to work in this way – to run an office from a laptop with cloud computing and a smart phone. I’m never sure what is next, or what is around the corner, but my modus operandi is to ensure Invisible Studio makes no commitment to anyone’s future or anyone’s ongoing livelihood, especially my own. It exists merely to carry out interesting work. If the work is good enough, we find a way to make money and thrive creatively. Nothing else matters. 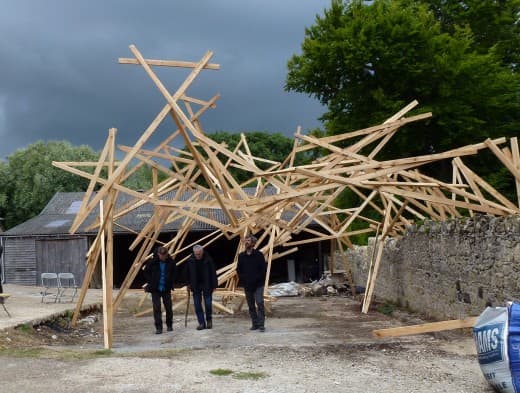