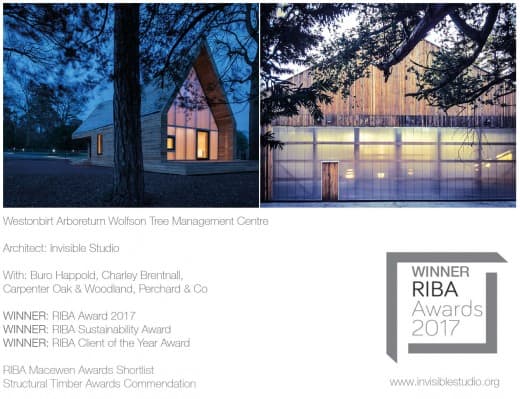 We are thrilled that our Tree Management Centre for Westonbirt Artortetum won three RIBA Awards last night: An RIBA Award, the RIBA Sustainability Award and the RIBA Client of the Year Award. This is a testament, we feel, to a remarkable project.

The project at Westonbirt – for the Forestry Commission – was won by us through a formal government tendering process and we included Charley Brentnall as part of Invisible Studio – the design team – pre contract, before he went on and won the formal tender to act as main contractor for the larger of the two projects, the Machinery Store. Charley ran a  course early on with volunteers to hew the enormous Corsican Pine into the main structural members, before leading the construction phase for the Machinery Store with his extraordinary team of carpenters from Carpenter Oak & Woodland and NVQ Student Carpenters, and the smaller of the two buildings was let to Nick Perchard and Jim Symon (who were originally trained by Charley) who then then led a wonderful band of Westonbirt Volunteers in the construction of the ‘Mess Room’ welfare building, many of whom have gone on to use these skills gained from Nick and Jim in their own projects.

The engineering by Buro Happold was deceptively complex: the main timber structural members are possibly the biggest ever in UK Construction (Certainly for 150 years), and very few engineers have the nous like Andrew Wylie and Graham Clarke to understand how to use the unpredictable, ungraded, un processed, untreated timber directly from site. The Sustainability Award that we gained is testament to their thinking.

And finally – the Client of the Year Award for the Forestry Commission means so much when – as the jury citation said – this is a client that totally owns these buildings now, and fully supported the experimental, risky and unpredictable way of working that we espoused from the outset, where an option would have been to have put up a few steel portal sheds. Westonbirt had never used their own timber in any of their buildings before, and certainly nothing on this scale. 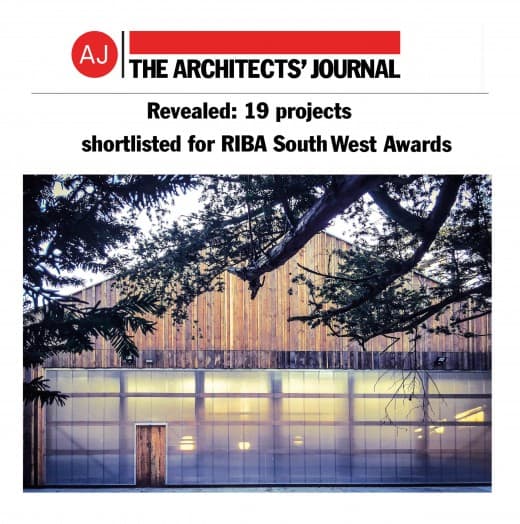