What next Zaha? Where now? 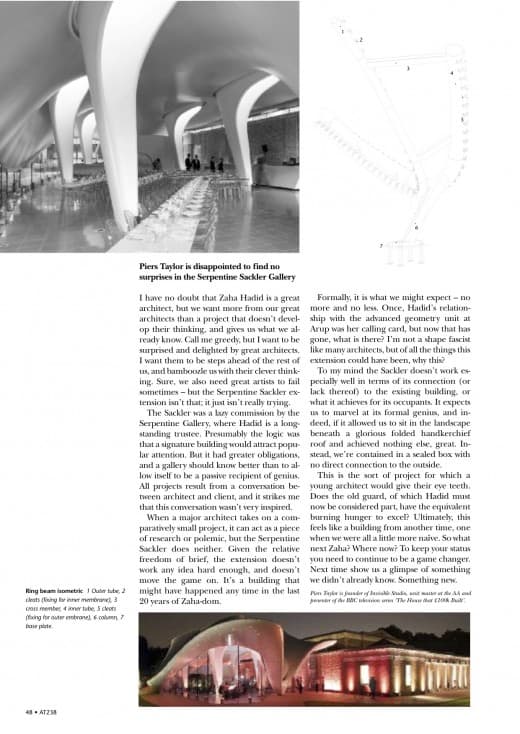 I’ve no doubt Zaha is a great architect, but we want more from our great architects than another cursory project that doesn’t develop their thinking in any way, and gives us what we already know.

Call me greedy, but I want to be surprised and delighted by great architects. I want them to always be several steps ahead of the rest of us, and bamboozle us with their clever thinking. Sure, we also need great artists to fail too – but the Sackler extension isn’t really failing; it just isn’t really trying.

The Sackler feels lazy in so many ways. It was a lazy commission by the Sackler, where Zaha is a trustee. The Sackler’s logic was presumably her commission would encourage lay visitors, rather than anything else. But they had greater obligations than just this, and a gallery should know better than to allow itself to be a passive recipient of genius. Any project – any interesting project – is the product of a conversation between architect and client, and it strikes me that this conversation wasn’t very inspired. Maybe Zaha isn’t used to being challenged – but being challenged is surely part of the delight of the best interactions with clients?

The point, of course, of a small project for a major architect is to act as a piece of research where either something – anything – is explored, or where it acts as a piece of polemic – but this is neither. With a small project from an enthusiastic client, you are so free from the conventional constraints – space, money, restrictions on experimentation – whatever – and given the relative freedom of brief from the Sackler in terms of what it had to do, the extension doesn’t work any idea hard enough. It’s not particularly clever.

Zaha’s oft praised greatness is more reason for not making allowances. One definition of a great artist (and part of the responsibility they have to retain this status) is someone who keeps pushing at the boundaries of what is possible and moving the game on. But the Sackler doesn’t move the game on. It’s a building that might have happened any time in the last 20 years of Zaha-dom. Formally, it is what we might expect – no more or no less. It is an instant Zaha by numbers. Once, Zaha’s relationship to the advanced geometry unit at Arup was her calling card, but now that has gone, what is there? I’m not a shape fascist, like many architects, but of all the things this extension could have been, why this?

The Sackler doesn’t even really work very well in terms of the lack of connection to the existing gallery (its main raison d’etre), or what it achieves for the occupants. It expects us to marvel at its formal genius, and indeed, if it allowed us to sit in landscape under a glorious folded handkerchief roof and achieved nothing else – great – but instead, we’re forced to be contained in a rather oppressive and mean sealed little box with a clunky soffit and no connection to the outside. Despite what Zaha may think, walls of glass are very much a physical barrier.

Materially I feel a little cheated, too – because it doesn’t really have materials – or at least doesn’t use materials interestingly. Materials were never really Zaha’s thing, granted, but here, the materials are little more than an inconvenience to her – particularly when they don’t go round corners very well.

The Sackler extension is the sort of project that a younger architect would have given their eye teeth for, used to demonstrate clever thinking, and show the world what they were capable of. It makes me wonder whether the old guard, of which Zaha is now part – have the equivalent burning hunger to excel.

Ultimately, it feels like a building from another time, one when we were all a little more naïve. But that was then – and this is now. What next Zaha? Where now? To keep your status you need to continue to be a game changer. Next time, Zaha, show us a glimpse of something we didn’t already know. Something new.