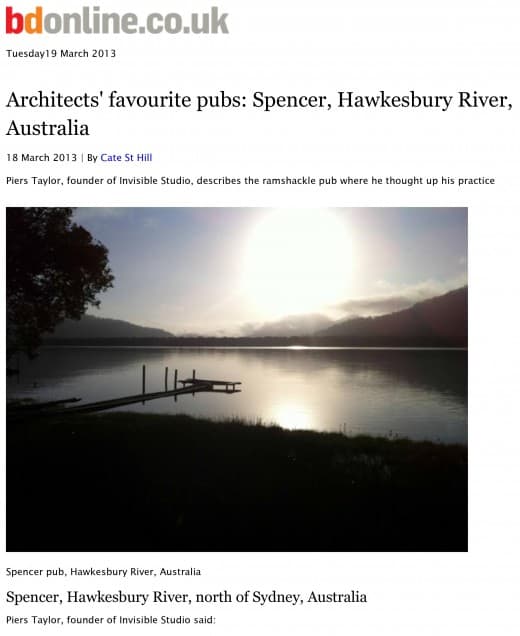 Piers Taylor writes: “My favourite pub is the Pub at Spencer, on the Hawkesbury River, 25 miles or so as the crow flies north of Sydney.

It doesn’t really have a name other than the Pub, and in the strictest terms, it isn’t really a pub. It’s a ‘Bottle Shop’ with a series of ramshackle chairs and only one very large table under the gum tree opposite and a wharf where you tie up your boat.

It’s only really accessible by boat, and of course it’s a badge of pride to arrive in the most battered tinny possible. The other option is a 50 mile twisting road. You buy your grog in the store, and then meander across the road with it. If you phone in advance, they’ll kill a chicken and barbeque it for you. I’ve spent a long time hanging out there, and done a great deal of head scratching there (I probably just needed a nit comb).

As much as the low key and ramshackle charm, there’s an astonishing, quite mesmerising physical beauty. It slaps you in the face makes you quite slack jawed with awe. The river has virgin bushland – unchanged for 50,000 years – that comes down to the water, and a series of mountains as a backdrop. The light changes radically throughout the day – in the morning, it is purple and lime green, and in the evenings an extraordinary orange that burns on the clouds in the distance.

There are pelicans, herons, cockatoos, dingoes, kangaroos, bush turkeys and benign jellyfish the size of dustbin lids. At night, the atmosphere changes again, and feels more than a little dangerous as you become increasingly intoxicated, with strange noises and the odd new arrival emerging from the surrounding pitch black bushland.

It’s a perfect place for just hanging out. I was told about it by my old friend – architect Lindsay Johnson who lives down the river and who is extraordinarily adept at passing time on the water’s edge in his swimmers, stubby in hand. It’s not on any tourist trail, and it’s a place where you meet strange passers by – drifters, travellers, old bush characters  – all seemingly living out on the edges. I love that atmosphere. Although it’s geographically close to the city, it feels a million miles from anywhere, and feels like a kind of frontier.

It was there that I dreamt up my practice, there among the cool summer breeze that blows in the afternoons and takes the heat out of the day. There among the winos, the weirdos, the drifters and the hobos. In my mind, the place still represents how a practice could operate.”