No Longer the West Country Underdog 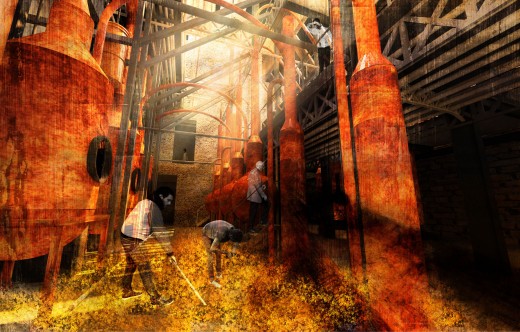 Architectural education is in a time of flux and, no longer happy with the idea of an education as a super-expensive vocational course providing skills for existing employers, many students are struggling to see the relevance of a 5 or 6 year study period that doesn’t ultimately equip them with the skills to be able to come to practice on their own terms.

As a discipline we seem to be in danger of losing our moral compass and sense of purpose as we head for where the money is and subsume any personal ethics beneath those of our clients. Architecture – as any of the arts – needs rethinking by each successive generation of students who ultimately need to be given the critical framework to be able to invent their future.

The default position of many mainstream schools of architecture is simply to teach architecture as the crafting of a static object, presented as a thing of shallow beauty, and perpetuating a way of doing architecture that has been pretty fixed for several generations. It’s kind as if the social issues raised by Modernism or the 1960s never happened, and if ever architectural education needs to change, it is now.

More than anything, architecture schools need to broaden to equip students with the ability of dealing with the mess and chaos of reality with all its glorious dirt and grit. Architectural education needs to change to embrace other and alternative skills needed for architects to act convincingly in the world. This include developing the adroitness for engagement with real and local communities, for tackling environmental issues, for engaging with the concerns of planning policy and, more importantly, engaging with planning at a strategic level. As it happens, this is exactly what UWE are doing.

From an almost standing start and in only a few years, with the extraordinarily energetic Elena Marco at the helm UWE has successfully reinvented itself as a school that is addressing head on the need for architectural education to diversify. UWE’s current courses are unusually wide ranging, and the school adopted early on a joint programme of architecture and planning, and has built on this successfully.

Planning – long seen as architecture’s less glamorous cousin – is now a field in which many architects are realising the real design happens. It is where the big picture is defined, the context is framed and strategies for change created. Planning – rather than merely architecture – is where the future is invented. As Vincent Lacorava has shown in his move from AOC to Croydon Borough Council, planning can be truly exciting and supremely powerful. It is surprising that more universities have not followed UWE’s lead and incorporated planning into the core of the main degree courses. In addition to planning, UWE also have a new dual architecture and environmental engineering degree with RIBA /CIBSE accreditation.

At the end of year show, most of the work I saw was from the final (MArch) year, which is overseen by Rachel Sara (author of Architecture and Transgression). Sara has successfully embedded a stand-alone research module into the core projects, and this translates into a set of student projects that have real depth. Far from focusing on the design of a single building, the diploma projects take on far wider issues, often in places that benefit from architecture the most.

It is a delight to see is students give design its dignity back, and produce work that understand that design can be a tool for delivering vicissitude and innovation, delivered in a grass roots, bottom up way. More than ever, I saw evidence of how design can be a tool for change. It was also a joy to see so many of the students tackle the essential issues of urbanism, reuse and sustainability so convincingly. With projects rooted in these pressing concerns and thorough research one could have almost forgiven the students had they not delivered interesting built proposals, but here too, almost without exception, were a set of buildings that were delightfully eclectic, materially and tectonically rich, and spatially diverse.

UWE is showing how, away from the razzle-dazzle of the big city, from a campus that is a close cousin of a business park, there is a way of doing things differently. Not just differently, but better, as evidenced in work that is rich, quirky, layered, convincing and clever, produced by autonomous and individual students who seem fearless at entering into a static world and creating change. What a long way UWE has come in recent years. Still the West County underdog? I don’t think so. 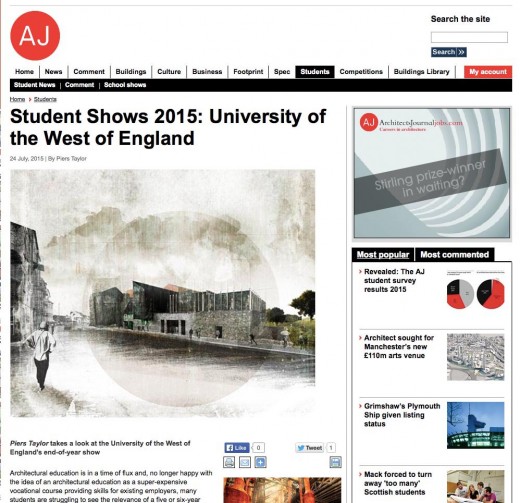